Detective Dalloway jumped into a cab
“Follow that van!”
After some time, they arrived at the Isle of Dogs, where Mr. Wellbeloved’s pound was situated. The van was allowed in by the guard, who then closed the solid metal gate, refusing to let the cab follow.
“What happens to the dogs now?” She enquired, after exiting the cab and asking the driver to wait for her.
“Well tomorrow is Friday, when they get…you know”. He drew his index finger across his neck. 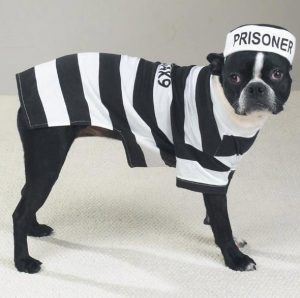 “But you can’t just do that. Not if a dog has an owner like me, who wants him back!”.
“Mr Wellbeloved gets paid by results”.
“Please let me talk to him”.
“Oh, he’s not here today. Do you want to make an appointment?”
“Yes please! First thing tomorrow please.”
“Hmmm”, the guard turned over the pages in a large book with soft white fur covering dotted with black spots. “I’ve got nothing until Monday. Sorry.”
“What!?”. Exasperated. “He’ll be…you know, by then”.
“Sorry. Rules is rules”.
“Right. I’m coming back first thing tomorrow. Tell Mr. Wellbeloved when you see him”.
“He won’t like it”.

Suddenly there was an ear-splitting explosion. A cloud of dust could be seen over wall of the dog pound. Then silence. Then the sound of a hundred dogs barking for joy. As Deirdre raced around the corner towards the sound, she saw them jumping, tumbling and some climbing cautiously over a pile of bricks and rubble which lay where a wall had once been. The dogs fanned out gleefully in all directions, and amongst them…was Elgie! 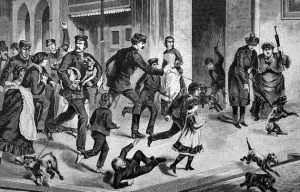 The two friends ran towards each other and embraced, Elgie licking her face, and she scratching behind his ears and making them flap adorably.

“Oh Elgie, it’s so good to see you. You’ve had a near miss, you know. And I rather think it was your own fault for straying from the plan. But that doesn’t matter now. At least you are safe”.
“We’d better get out of here before the police arrive.” Elgie sounded like a veteran law-breaker now.
“I’ve got a cab waiting”.

They headed off back to the front gate, where they witnessed the guard being cornered by a pack of snarling Dalmations; all except for one, a large Doberman, who seemed to be in charge. As a distant siren sounded, this rather sinister hound turned and fled, leaving his crew to face the music. Indeed, as the cab drew off the Doberman was sauntering down the road as though nothing had happened, whilst the guard had already caught several black and white puppies in his net with the help of the first officers on the scene. 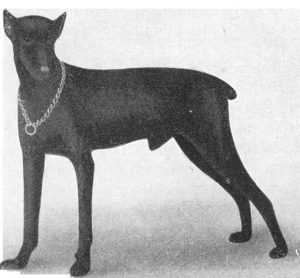 “That was Swagmire!” Exclaimed Elgie, once they were able to talk. “I was going to tell you about him anyway. He was rounded up with me in Westminster, hanging around outside the dog show. But he evidently had someone on the outside. They had planned the getaway even before we arrived at the pound. It’s almost as if…”. He trailed off.
“As if what?”
“As if they were able to communicate with each other even though they were apart…you know, like we do in 2328 using the neuralnet”.
“Impossible. Unless…..”.
Could there really be other chronolopers here in London in 1928? The possibility was deeply disturbing. This just wasn’t supposed to happen. Chrono-scientists in 2328 were really careful about it. Unless Swagmire and his accomplice came from somewhere else…another time stream?

The implications began to sink in. History had already been altered when Jix did not announce the suffrage bill. The most immediate question was not how Swagmire had managed to effect the jail-break, but whether history would be put right again. Things had to happen as they happened, more or less, or their own future was threatened. So what was Swagmire’s game? And what would the hypnotised Jix do next?