When Elgie returned, it was with helpful and unhelpful news. Dogs did indeed know stories about such tunnels running under the city. Indeed, they should really be thought of as pipes, because they were known to be full of water which was pumped along them. The unhelpful news was that no one knew where they started or ended, or where the pump was and why it was pumping. There were stories, however, about a large octopus-type creature – some said with human legs, and some that it was in fact a dragon – that travelled around the London sewers, and speculation that it also used these pipes.

“Well we can rule that out,” said Deidre. “There’s nothing like that in the history books”.

“On the contrary. Percy has recently seen such a creature swimming in the canal. OK I know he’s not the most reliable witness, but Gruff says that many narrow-boat dogs have also seen it in the past few weeks. You’d better tell Mr. Bladon about it”.

Deidre plucked up courage and they descended to the street. She sometimes wondered whether she should stop humouring Elgie, but she was far too fond of him. So she was amazed when instead of snorting with derision, Mr. Bladon exclaimed,

“How have you heard about Baby Cthuluh? We’d better not start spreading stories about it being back. We’d be stirring up a right hornets’ nest. I’m going to fill this hole in right now and say no more about it.”

“Baby Cthuluh? What’s that? Is it dangerous?”

“Not as long as it stays in the tunnels and canals. If it gets into the Thames, it could grow to hundreds of feet long. We have to act fast and contain it.”

Later that afternoon Elgie was back with Gruff on his boat, now moored at the Isle of Dogs. He was keeping an eye on a lock. Every time a boat came through onto the river, Gruff would dive under and make sure that it was the only thing to exit. It was dangerous work, but Gruff was up to it. Sure enough, he eventually came to the surface looking alarmed.

“Elgie, you’ll have to help me. Baby Cthuluh is trapped in the lock. It followed that boat in but luckily it didn’t get through before the lock closed”.

The water in the lock seemed to be boiling, and from time to time a green creature could be discerned, sometimes by a tentacle, sometimes a clawed foot, and sometimes even a wing. But eventually the murky water calmed and, almost comically, the creature lifted its head and began to tread water. Then it began to speak! 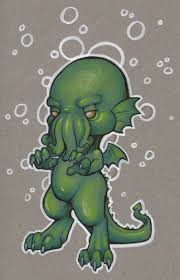 “Oh please let me out! I won’t do anything bad. I just need to grow my wings big enough to fly back to my home planet Vhoorl and join my kind. I got left behind when they went because I was too small. I’ve been working hard to grow big enough and I’ve been keeping the canals clean for you by filtering water and recycling it through the pipes”.

“Did you build the pipes?” asked Elgie

“Yes, my race are sewage workers. We travel the galaxies looking for gainful employment in this vital service industry. Londoners don’t want to clean the sewers, and given that there are no anarchists to do it yet,* we provide vital migrant labour. But the Council refused to pay us what we were owed, so we left but, like I said, I got left behind.”

It is difficult for even such determined dogs as Elgie and Gruff to open lock gates, so Elgie fetched Deidre and, swearing Mr Bladon to secrecy about who Baby Cthuluh really was, they cranked the lock gates open and the creature, extending its wings and waving it tentacles excitedly, spilled out into the Thames with a ‘Wheeeeee!”. It was growing to an enormous size even as they watched.

Later that night, Deidre, Elgie, Mr. Bladon (who added his voice to the general complaining about the tight-fisted council), Percy, and Lulu and her girlfriend Lady, witnessed an incredible spectacle from Gruff’s boat. Gruff had baked some potatoes in his stove and everyone warmed their hands and paws, and drank gin. Soon enough, bright green lights under the water rose quickly to the surface and revealed themselves as a luminescence covering the no-longer Baby Cthuluh, now an awe-inspiring creature some two hundred feet long. As it unfurled its wings and took to the skies it uttered a deafening call of thanks to its new friends, and in a flash, it was gone.

Lulu and Lady went off to a club, and Elgie and the humans walked Percy home. But Deidre could not sleep. She had taken one of her history books to bed. That always kept her awake anyway, but she had been searching without success for any reference to the events that had taken place. She had suddenly sat bolt upright. Cthuluh was not, indeed, recorded in historical documents, but was nonetheless real in a sense. It was the creation of the as yet almost unknown American author of horror-fiction, H. P. Lovecraft.

“There’s something very wrong with this 1928”, was the last thought she had before finally slipping into a troubled sleep.

*(The question anarchists get most tired of answering is, “If no one had to work for money, who would clean the sewers?”).