Detective Dalloway could hardly wait for a general election. One reason she had chosen 1928 specifically was because there would be one the following year, Thursday 30 May 1929, to be precise. Any day now, the Conservative government would make the announcement that women aged over 30 would be able to vote in it for the first time. She wondered whether she would get swept up in their mounting enthusiasm. As it was, the election revealed the first evidence of some outside party messing with the timeline. Repairing it would lead her into a chrono-intervention herself….

In 1918 women were allowed to vote for the first time, as long as they were over 30 years of age or were over 21 but had significant property. On 2 July 1928 The Representation of the People Act allowed all women under 30 to vote too. But how it had come about was all rather peculiar. In March that year, a priceless old duffer – just the sort Det. Dalloway had hoped to encounter – called Sir William Joynson-Hicks, and known as ‘Jix’ – made the announcement. This was rather a shock to the rest of his Party, because he hadn’t discussed it with them. Instead, he appeared rather to have come up with it on the spur of the moment, and out of seemingly nowhere. During discussion of a Private Members bill, he was seemingly startled by the frequently startling Lady Astor, M.P. for Plymouth Sutton, who interrupted one of his interminable diatribes. Jix suddenly changed the subject, blurting out that the government would give rights to women to vote in 1929 on the same basis as men. In 1931 Sir Winston Churchill, who liked starting sentences with ‘Never’, would say of the event, “Never was so great a change in our electorate achieved so incontinently”. In fact, five million more women would be added to the electoral role, making them almost fifty-three percent of those eligible to vote.

On the evening after the announcement was – or should – have been made, Detective Dalloway accidentally-on-purpose bumped into next-door’s maid, who was scrubbing the steps. “So, Tilly, aren’t you excited? Or are you bored with politics? Oh sorry, you are busy. But how do you plan to use your vote next year?” 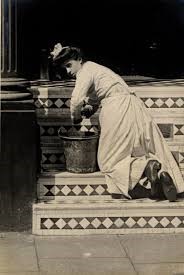 “Erm, not sure what you are talking about Detective Dalloway”.

“The general election next year Tilly. Jix has spoken! Lady Astor tricked him into it, or something. Parliament must pass the Representation of the People Act soon, so women like you – you are under 30 and without property, aren’t you? – will be able to vote along with men!”

“Well I never heard a thing about it. He’s never done anything for me, nor has that Lady Astor. Want me to clean your office for 2 shillings a week?”

“Oh no, thank you. Elgie is supposed…. Anyway, I must go and buy a newspaper”.

Rather bemused, Detective Dalloway headed for the paper seller on the street corner, to find that Charles Lindbergh had been awarded the Medal of Honor for crossing the Atlantic. These pilots! She really had started something of a craze by arriving that way at Tibidabo. But more importantly, Jix hadn’t made any announcement! Without that, there would be no passing of the Act on May 7th. No ‘Universal Female Suffrage’! Whatever had could have happened? Should she do something? What on Earth should she do?…………….